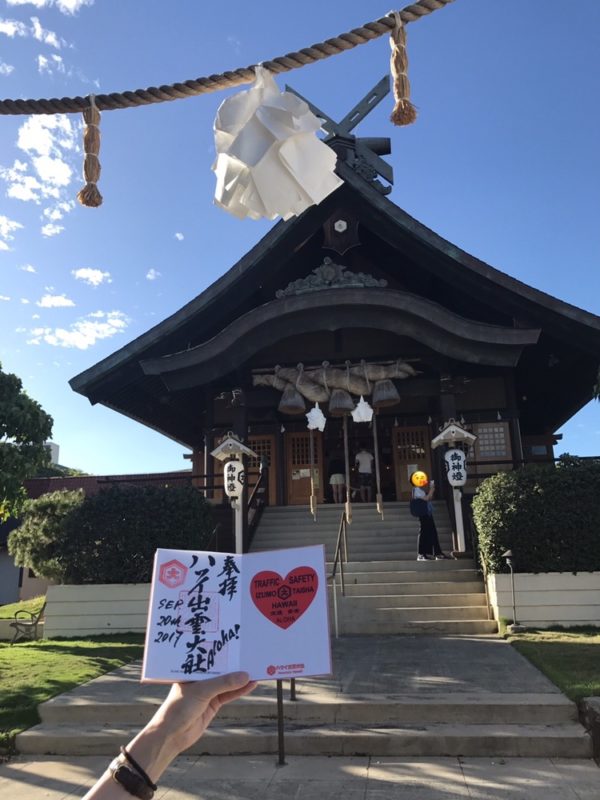 Did you know that there are shrines overseas where you can get a shrine stamp? 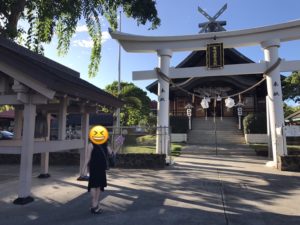 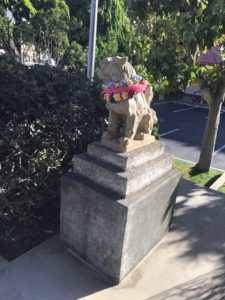 The white torii gate looks great in the tropical blue sky. The guardian dogs are also dressed in Hawaiian style with leis.

I can’t wait for the day I can tour the shrines again. 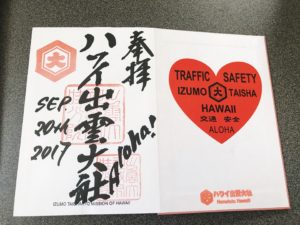 It is a branch temple of Izumo-taisha, officially Izumo Ōyashiro, in Shimane Prefecture, Japan, and its deity is Okuninushi-no-Mikoto.

The God of enshrined here is famous as the god of marriage, and also the god of medicine and nation building.

The page to the right is a road safety sticker.

At Izumo Taishakyo Mission of Hawaii, there are many amulets with tropical patterns, as well as “Water Safety” (for surfers) and “Marathon” (for runners), which we can only get here, so they will be great gifts.

Where can we get a shrine stamp?

The shrine office is located on the left side of the main hall.

The shrine stamp book available at Izumo Taishakyo Mission of Hawaii has a hibiscus and plumeria pattern.

That’s the South-land! It’s a cute design that’s hard to find in Japan. 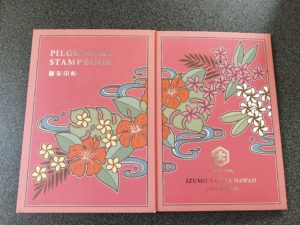 It’s close to Chinatown and downtown, so why not stop by for a visit?

Shrines and Temples in Hawaii

There are many other shrines and temples in Hawaii besides the Izumo Taishakyo Mission of Hawaii.

There are many immigrants and tourists from Japan in Hawaii. There are also annual New Year’s visits and festivals, so if you get tired of the beach and shopping, you might enjoy visiting shrines and temples.

In the Kalihi district of Honolulu, the Hawaii Kotohira Jinsha-Hawaii and Dazaifu Tenmangu are located within the same precincts.

The main enshrined deities are Omononushinomikoto at Kotohira Jinsha-Hawaii and the Dazaifu Tenmangu Shrine is dedicated to Sugawara Michizane, but seven shrines that had been in existence on Oahu since before the war were merged into one, and more than 30 gods are worshiped here.

There aren’t many shrines in Japan where we can pray for so many gods at once.

The main enshrined god of Of Kotohira Jinsha-Hawaii is the god who created the country together with Okuninushi of Izumo-taisha, and he is the god who brings prosperity such as rich harvest, industry, and culture, and peace to the country and people.

It is also worshiped as a guardian deity of the sea because it is a god who appeared at sea.

Sugawara Michizane of Dazaifu Tenmangu Shrine is the god of learning.

We can also get a lovely shrine stamp here.

In addition to the rainbow and turtle patterns typical of Hawaii, the shrine stamp is decorated with colorful seasonal patterns. Why don’t you try it when you visit Hawaii?

Daijingu Temple of Hawaii is as a branch shrine of the Ise Shrine, it enshrines Amaterasu Oomikami and Amanominakanushinokami as the main deities of the shrine.

This area is said to be one of Hawaii’s most popular power spots, and next to the shrine is the Queen Emma Summer Palace, the former home of Hawaii’s royal princess, Emma. 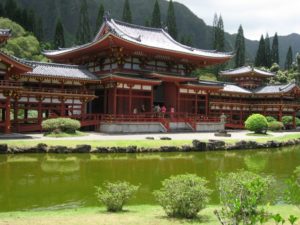 In 1968, in commemoration of the 100th anniversary of Japanese immigration to Hawaii, it was erected in a park and cemetery called the Valley of the Temples Memorial Park.

It is smaller than Byodoin Temple in Uji, Kyoto, but like the real thing, the imposing vermilion building is symmetrical and has a 3-meter tall seated statue of Amida Buddha inside.

You’ll forget that you’re in Hawaii as you watch the koi swim in the large Japanese garden-style pond.

There are other shrines and temples in Hawaii which we can’t introduce this time, so if you are interested in feeling Japan in Hawaii, it is fun to find and visit them!

Asaskusa Sensoji Temple, the place to go in a kimono

Sensouji Temple is one of the most famous sightseeing spots in Tokyo. Did you know that it is the oldest temple i...

A red seal is a treasure stamp that you receive from a temple as a sign of your prayers when you pay a visit to a temple and pay a sutra (a sutra), and it's not a stamp rally, so we better to visit a temple and shrines before you get one.
Wagashi with tea ceremony of September
Trivia of Japanese hemp leaf pattern / Traditional Kimono pattern ④