I have been receiving the Goshuin-Cho since 2013.

I started to collect it with my grandfather, who loved temples and castles, and I’m on my fifth book now.

It’s very interesting to see the personality of each shrine or temple and the character of the person who wrote it.

I’ve always liked the atmosphere and architecture of shrines and temples, so I guess I was one of the people who often went there, and since I started receiving the red seal, I’ve started looking up nearby shrines and temples on my travels.

It’s important to learn something when we are traveling too, is it?

We do not recommend you to just hang out on your trip.

Upon closer learning on shrines and temples I visited, I found many interesting things and discoveries!

I wish I could introduce you to a few of them.

Goshuin-Cho can be translated as “Japanese Pilgrimage Stamp Book” or “Shrine Stamp Book”.

When I visited Nikko in January 2020, I received this paper along with a red seal at Nikko-zan RIN-NOJI Temple. 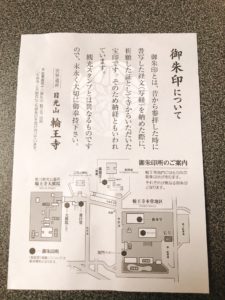 御朱印とは、昔から参拝した時に写経した経文(写経)を納めた際に祈願した証としてお寺から頂いた宝印です。そのため納経ともいわれています。観光スタンプとは異なるものですので、末永く大切にご奉持下さい。
出典：日光山 輪王寺
Goshuin is a treasure seal given to me by the temple as a testimony. It was given when people visited a temple to pray and pay sutra which was copied. For this reason, it is also known as a sutra. It is different from a tourist stamp, so please keep it for a long time.
Source : Nikko-zan RIN-NOJI Temple.

The Goshuin is not a stamp rally, so I make sure to visit the shrine or temple thoroughly before receiving it.

The Goshuin-Cho is also very popular, and is now available at stationery stores and fashionable goods stores!

When I run out of Goshuin-Cho pages, I try to get them at the shrines and temples I visit. Because I think it’s also a fate^^ 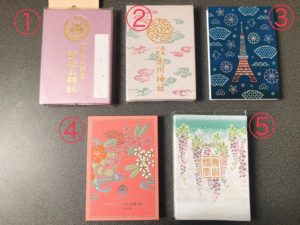 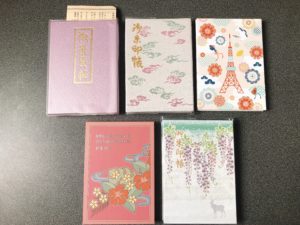 We’ll introduce each of them later.

There is a lot to introduce to you about the history and characteristics of each shrine and temples along with Goshuin.

Each one is a truly precious memory.

Did you know that there are shrines overseas where you can get a shrine stamp? That's the Izumo Taishakyo Mission...

Asaskusa Sensoji Temple, the place to go in a kimono

Sensouji Temple is one of the most famous sightseeing spots in Tokyo. Did you know that it is the oldest temple i...
Seasons and Patterns to be aware of when wearing a kimono
「Funawa」Sweet Potato Yokan