In Japanese, the wave pattern is called “Seigaiha”. It is used as a design pattern of kimonos a lot. The traditional design one of those auspicious patterns. If you like the origin of this pattern, we would like to recommend looking for kimono of the design. 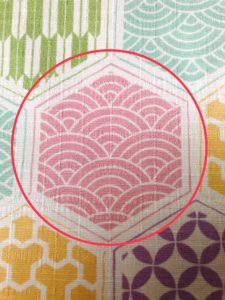 Seigaiha is the pattern consisted of fan-like semicircles stacked on top of each other and repeated in a wave-like manner.

If we think of the Wi-Fi symbol, it’s easier to understand.

The pattern represents a “prayer for eternal peace” in an infinite number of gentle waves.

Although there are many theories as to the origin of this pattern, it was originally used in ancient Persia, and the prevailing theory is that they were introduced to Japan via the Silk Road in the Asuka period.

A pattern similar to the “Seigaiha” is also found in Egypt, Turkey, and China.

The design, which is repeated over and over again, represents a prayer for eternal happiness.

It is believed that the name of this pattern comes from the fact that people came to wear this pattern of kimono during the Gagaku (ancient Japanese court music) performance “Seigaiha”.

In the seventh volume of “The Tale of Genji”, written in the Heian period, Hikaru Genji and the head patriarch play depicted dancing Gagaku of “Seigaiwa” elegantly. 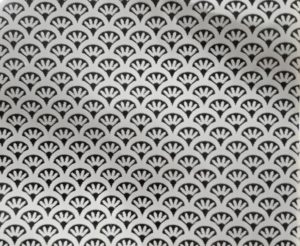 →Flowers in the shape of a blue ocean wave.

→ This is a Seigaiha that is not laid down but has a torn pattern in places.

How was the story of Seigaiha? Knowing the origins of the pattern makes it all the more fun!

When wearing a kimono, pay attention to (1) If the motifs are of plants and animals in nature, "Season ahead! is the iron rule. (2) If the motif is a seasonal event, it's OK up to the day of the event plus ahead of time. (3) Non-seasonal patterns and flowers patterns from all four seasons are OK for all seasons.
Origin of Japanese orange peel pattern / Traditional Kimono pattern ①
Wagashi with tea ceremony of May