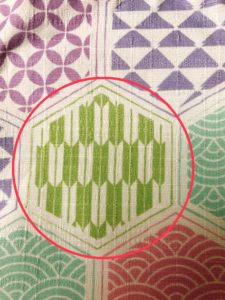 Japanese arrow pattern, called “Yagasuri” is a pattern of white and colored arrow feathers arranged vertically in an alternating pattern.

Traditionally it used as kimono pattern.

Once an arrow is shot, it flies straight away and never comes back.

Because of its strength, it was thought to be a good omen to ward off evil, and during the Edo period it was also used as a wedding kimono to prevent bride from returning to their homes(means to prevent divorcing).

In the Meiji and Taisho era, the culture known as “Taisho Roman” was born, which blended classical Japanese culture with innovative Western culture, and it was popular for female students to wear the hakama with boots as their school uniform.

The combination of an Japanese arrow pattern kimono and the maroon hakama (hakama for women) became popular nationwide after Utako Shimoda, who served as the school superintendent of the Noble Girls’ School (the predecessor of today’s Gakushuin Women’s Section), invented the women’s hakama and adopted it as a school uniform in 1885.

Even today, Japanese arrow pattern is a popular pattern to match with the university’s graduation ceremony hakama. 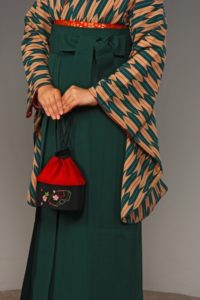 If you are interested in the pattern, it’s fun to look for it as costume party.

When wearing a kimono, pay attention to (1) If the motifs are of plants and animals in nature, "Season ahead! is the iron rule. (2) If the motif is a seasonal event, it's OK up to the day of the event plus ahead of time. (3) Non-seasonal patterns and flowers patterns from all four seasons are OK for all seasons.
Brown Sugar Manju from Sendai City “Tamazawa Sou-honten”
Introduction of starter 6-pieces set for Tea Ceremony Practice