From the Japanese standpoint of orange peel pattern. 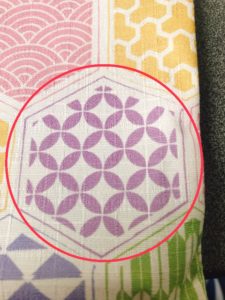 →The pattern of overlapping circles and ovals of the same size in quarters is called “Shippo mon”, and this pattern of a regular succession of patterns on the left-right and up and down is called “Shippo Tsunagi”. It translated as Cloisonne. And it is known as the “Orange peel” pattern.

It is a congratulatory pattern that represents “happiness, wealth, prosperity, and unbroken relationships” because the circles look like forever linked in a chain. It is also said to indicate that a person’s relationship and connection with others is as valuable as the seven treasures.

It’s a Buddhist term that means the “seven treasures” below.

６．珊瑚(Sango): In the Lotus Sutra, it’s not coral, it’s pearl

This Shippo Tsunagi (cloisonne connection) may also be painted with gradients and many colors like below.

In Buddhist teachings, it is said that “having seven colors at once will protect you from the seven evils and bring you seven good fortune. And Wearing seven colors is said to ward off evil and drive away evil.

There are other theories such as…

2. When Kobo-Daishi (Kukai) set out on his journey, he is said to have worn seven-colored items to avoid difficulties.

3. The theory that the seven colors represent the seven gods of good fortune.

How was the difference between the shippo pattern and the orange peel pattern?

We will introduce other traditional patterns of kimonos!!

When wearing a kimono, pay attention to (1) If the motifs are of plants and animals in nature, "Season ahead! is the iron rule. (2) If the motif is a seasonal event, it's OK up to the day of the event plus ahead of time. (3) Non-seasonal patterns and flowers patterns from all four seasons are OK for all seasons.
「Funawa」Sweet Potato Yokan
Origin of Japanese wave pattern / Traditional Kimono pattern ②